For years, Robbie and Lindsay Everest admired the late-19th-century greystone townhomes with original stained-glass windows across the street from their condo in Chicago’s Old Town Triangle. In addition to their curb appeal, the historic dwellings shared a beautifully landscaped, gated alley—no cars allowed—where children played, and adults broke bread at communal tables.

“It’s a unique place,” Lindsay explains. “The owners have taken incredible care of them and done significant work to bring them up-to-date.”

So, when one of the greystones went up for sale during the pandemic, the Everests snapped it up—their dream single-family home, for raising their two young children. They hired interior designer Hayley Kauffmann, whose company is Hayley Maureen Interior Design, to help them make it their own.

Their condo was traditional in style, and they were ready for something different. They urged Kauffmann to lead them in a bold, modern direction, while honoring the home’s historic architecture.

“I could tell right off the bat that they had an adventurous side,” the designer says, citing their colorful art collection. “They wanted me to push them, even if they showed hesitation.”

The couple’s confidence in Kauffmann grew as the project progressed. For example, the couple was unsure about the wool-and-silk area rug with a hummingbird motif, which she selected for the living room, but they loved it the second it hit the floor.

It defines a cozy seating area that includes a large, rounded sectional and a pair of sculptural, barrel-back chairs covered in a deep, peacock-blue fabric—one of many jewel tones she selected for the space.

That holds true for some of the walls, which Kauffmann had covered in Venetian plaster. They have a texture that changes with the light, “as if they’re living, breathing entities,” she says. Tinted in a deep plum hue, an accent wall that runs from the front entry up the stairs coordinates with the dining room chairs, which surround a sleek, walnut-topped dining table underneath a dramatic, brass-mesh chandelier. Steps away is a linear console with bronze, mirrored doors.

“As a design firm, this is the first time we’ve had the opportunity to search for new things and develop new motifs for various rooms,” Robbie notes. “This project called for a lot of variety.”

Wallcoverings also play a key role. In the kitchen, a graphic wallcovering in a neutral colorway is a visually stimulating backdrop for classic white cabinetry and a built-in banquette, where a contemporary brass globe pendant floats over a rectangular white table with a tulip base.

A burnt-orange grasscloth wallcovering brings a sense of drama to the primary bedroom, where new, built-in cabinetry faced with antiqued mirror flanks the fireplace, which is original to the house.

The palette flows into the primary bathroom, where picture-frame moldings frame a daring floral wallcovering. A brass-framed, olive-green vanity with a high-gloss finish coordinates perfectly.

A lively Roman shade and matching throw pillows energize the neutral walls and sofa chaise in the cozy family area, which is located in a nook at the top of the stairs. An upholstered ottoman covered in a chunky, green-and-white, woven fabric keeps things interesting.

While the Everests initially balked at some of Kauffmann’s selections, she honored their request to push them in a modern direction, and they have zero regrets. Lindsay says, “With the work Hayley did, it’s very livable, and we utilize every single square inch.” 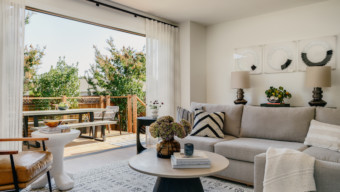