CLASSIC ALESSI PRODUCTS such as the Moka coffeemaker, designed during the 1930s by Alessi founder Alfonso Bialetti, inspire updates. Postmodernist innovator Alessandro Mendini, who died last February, left behind a playful version. Now, Moka’s new streamlined stovetop cousin by British architect David Chipperfield has a faceted cast-aluminum shell, a flat, fuss-free lid and a gray thermoplastic handle. It is sold in three sizes, priced from $35 to $55. VIOLA FREY, an artist linked to the Bay Area’s figurative ceramics tradition that includes sculptor Robert Arneson, is being lionized for the first time since her 2004 death with a retrospective exhibition through December 29, at the di Rosa Center for Contemporary Art in Sonoma. Viola Frey: Center Stage highlights the artist’s inherent feminism and independence and includes more than 100 of her distinctive monumental ceramic figures, drawings, sketches, photographs and bronzes, all curated by Amy Owen in conjunction with Artists’ Legacy Foundation, Oakland. BAY AREA/NEW YORK–based interior designer Orlando Diaz-Azcuy has been a longtime fan of the San Francisco Opera and symphonic music. So it is no surprise that his latest collection of furniture, designed for the Japanese manufacturer Matsuoka and dubbed Symphony, pays tribute to musical overtures and operas. The six consoles, cabinets and tables recently unveiled at the Rudin showroom in the San Francisco Design Center sport names such as Nocturne, Scheherazade and Satyagraha. Made at Matsuoka’s workshops in Fuchu City near Hiroshima, the finely crafted furniture has inlaid woods and cloisonné patterns that allude to lotus ponds and Japanese gardens. Sold through the trade at A. Rudin. AC HOTEL by Marriott Sunnyvale Cupertino, a boutique-style offshoot of the Marriott brand, has opened in a new five-story building on a relatively busy corner in Sunnyvale, minutes away from Apple’s campus and just north of San Jose. However, inside its beautifully designed modern, open-plan lobby/lounge/cafe/bar, the street falls away. Managed by the lively Evolution Hospitality group (think custom tattoo services and friendly reception staff wearing brightly colored Allbirds shoes), the LEED Silver–certified, 183-room hotel courts business travelers with plenty of meeting spaces, media rooms and a sunny, whiteboard-equipped breakout room off the lobby. But it also has plenty to offer leisure travelers, including a gourmet breakfast service, signature cocktails, craft beers and a unique gift “store” akin to a curated vending machine. Outside, a patio with a fireplace has additional casual seating. Average room rates hover around $200 and up. DURING STOCKHOLM DESIGN WEEK last February, design firm Form Us With Love and Danish manufacturer +Halle unveiled a modular Nest System Table that can be assembled using tabletops in specific component shapes made of Fenix laminate. The tabletops “turn” and “bend” when different components are combined atop high or low tubular powder-coated steel legs to form squared, circular, ovoid or curved/snaking tables. Designed for communal office spaces, this versatile B2B product could also be adapted for home use. Prices vary according to combinations. PARISIAN DESIGNER Eugeni Quitllet’s new award-winning work produced by the Italian company Pedrali is a stackable chair made of bent ash wood and with a clear or translucent polycarbonate seat that seems to float within the frame. Called Soul, it embodies the idea of a tangible, physical presence married to something more ephemeral. About $675; prices vary according to finishes. BARCELONA-BASED Nanimarquina, long known for beautiful handwoven, hand-dyed natural-fiber rugs by international designers such as the Bouroullec brothers and Ilse Crawford, has debuted a remarkable new outdoor collection of dhurries woven from PET (polyethylene terephthalate) plastic fibers that look and feel like other Nanimarquina rugs. They have to be touched to be believed. With this innovation, the subtle color variations and abrash of Nanimarquina’s traditional Tres and Shade rugs are now available in versions suitable for outdoor use, rain or shine. Oaxaca, a new outdoor line, includes vibrant geometric and floral patterns. Prices vary from about $1,690 to $5,300.

SONY PICTURES CLASSICS’ Ruben Brandt, Collector, a sumptuous animated film by Hungarian artist Milorad Krstić that debuted recently in the Bay Area, is worth tracking down in theaters or online. Ruben Brandt, a fictitious psychotherapist who suffers nightmares triggered by the sight of 13 famous paintings in international museums such as the Uffizi and MoMA, gathers a group of art thieves to help him tame his torments by “collecting” the offending works by Botticelli, Warhol and others. Although the plot is convoluted, the animation is mesmerizingly beautiful. You’ll be hooked. The various characters are rendered in surrealistic and cubistic styles. Identifying the movie’s backdrops — from famous films and paintings of Paris and other cities by artists such as Giorgio de Chirico and Edward Hopper — is also part of the fun. 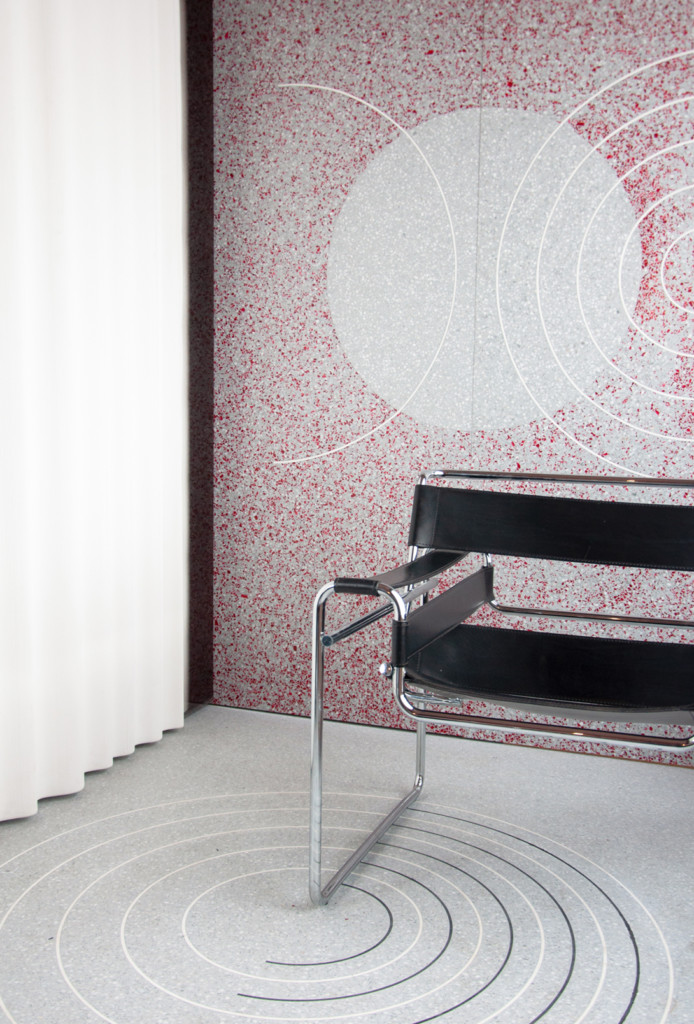 A NEW DUTCH construction-tech company called Aectual is a digital platform and 3D-print factory in one; it can print standardized or customized architectural forms on demand. This printing/building venture, a brainchild of DUS Architects, recently paid homage to the 100-year-old Bauhaus design movement with TINY [BAU]HAUS, printed via proprietorial robots and software and displayed at the Musée des Arts Métiers in Paris. “The Bauhaus movement led to the modernization of architecture, standardization and mass production, and now we enter a new era, offering tailor-made mass production,” says Aectual CEO Hans Vermeulen. High-end custom floors (slightly raised “molds,” 3D-printed on a subfloor, in which concrete or resins can be floated), facades, stairs and every conceivable architectural element can be crafted without conventional molds and tools. Award-winning industrial designer Patricia Urquiola, who has created furniture and lighting for noted European brands, has now also designed flooring using Aectual. “We don’t churn out crude concrete walls, but produce products in highly refined quality, on demand, in large numbers,” says DUS partner and Aectual CCO Hedwig Heinsman. Current clients include Nike, BMW and Amsterdam Schiphol Airport. Conceivably, with recycled and natural materials like bioplastics, even your patio at home could easily be made into a custom labyrinth. Or perhaps fire-damaged Notre Dame Cathedral might be more quickly restored this way. CLOSER TO HOME, Bay Area–based manufacturing company Gantri solicits and vets original lamp designs it chooses to license for sale under its own label. The designs are fully tested before being put into 3D production using biodegradable cornstarch-based heat-resistant PLA (polylactic acid). Hand-sanded and then lacquered, these affordable print-on-demand lamps look and feel like more expensive mass-produced counterparts. The Cantilever lamp by Louis Filosa (shown) costs about $100, and most other Gantri lamps are priced at about $200 each, shipping included. WHAT ARTISTS DO, a book by Point Reyes philosopher Leonard Koren, offers piquant insights into the inner workings of artists: they are not trying to make sense, he suggests, but are just making things that are meaningful. In the slim book, Koren quotes Ed Ruscha, Donald Judd, Robert Rauschenberg and others to deepen our understanding. Imperfect Publishing, $18

CUBA TALKS, a book about contemporary art inside and outside Cuba, by author/curators Laura Salas Redondo and Jérôme Sans (co-founder of the Palais de Tokyo in Paris), introduces 28 young and older established artists from the Cuban diaspora. Richly illustrated, it maps a little-understood universe. Rizzoli, $80

EDGE OF ORDER, a monograph that describes the unconventional work of architect Daniel Libeskind, is also part memoir. The lively 320- page tome designed by Rodrigo Corral reveals that Libeskind was an award-winning musician while growing up in Israel. It delves into personal details that aided or hindered the architect in the design of some of his best-known works, including the Contemporary Jewish Museum in San Francisco. Clarkson Potter, $80

111 PLACES IN SILICON VALLEY THAT YOU MUST NOT MISS, interior designer/author Floriana Petersen’s new guidebook, documents what appealed to her viscerally: including drawings by Leland Stanford Jr., whose untimely death at 15 inspired the founding of Stanford University and the mating habits of venture capitalists at the Rosewood Hotel bar. She includes stories of Burning Man, the Grateful Dead, Filoli Estate, the Carolands mansion and the forgotten barons who helped shape Silicon Valley. Illustrated with photographs by Steve Werney. Emons Verlag, $30

Noguchi and Hasegawa in Postwar Japan

A LOOK AT THE WORLD OF sculptor/designer Isamu Noguchi through his creative kinship with Japanese artist Saburo Hasegawa is at the heart of an upcoming exhibition, Changing and Unchanging Things: Noguchi and Hasegawa in Postwar Japan, September 27 through December 8 at the Asian Art Museum in San Francisco.

Both artists were born at the turn of the century and worked in Japan and the U.S., but Noguchi, who died in 1988, outlived Hasegawa (who for a time taught at the California College of Arts and Crafts in Oakland) by three decades and his legacy hence looms larger. ED HARDY: DEEPER THAN SKIN, the first museum retrospective celebrating famed tattoo artist Ed Hardy, at the de Young July 13 through October 6, joins a recent spate of tattoo exhibitions around the bay. Showcasing more than 300 of Hardy’s paintings,sketches, prints and 3D works, all curated by Karin Breuer, it highlights the artist’s goal of bringing “outsider” tattoo art into the mainstream. Hardy was still a printmaking student in the ’60s when he first encountered prints by the masters at the Legion of Honor museum. That spawned a fascination with the inked line and led to Hardy getting his first tattoo in Oakland in 1966. Later, a book on Japanese tattooing prompted him to think of tattoos as a meaningful, legitimate art form. His own body, until about a decade ago, was also a canvas. Although Ed Hardy: Deeper than Skin will focus on what came before and after his tattoo-artist career, it will help viewers consider tattoos’ place in the lexicon of art.

This article originally appeared in SPACES’s print edition under the headline: “Art, Animation & 3D on Demand“.