When artist James Goldcrown began experimenting with aerosol paints a decade or so ago, he habitually tested each can’s pressure by spraying a random heart design on a wall in his studio.

It wasn’t long before those hearts—layers and layers of them—propelled his career to international recognition. With spray paint as his signature medium, he has adorned facades, interiors, apparel, product packaging and other surfaces for luxury brands, corporations and discriminating homeowners.

Goldcrown was born and raised in West London. He taught himself photography skills, and he left school as a teenager to work as a staff member at a local darkroom. That led to working in fashion photography. He also dabbled in film and produced an award-winning documentary on the HIV/AIDS epidemic in Africa.

In 2007 he moved to New York City, where, in addition to working in fashion photography, he sold his paintings on the streets of SoHo. As he became disillusioned with the low pay and high, often demeaning, demands of the fashion world, he turned to his own artwork more and more. That’s when he started experimenting with spray paint.

“It was a quick way to overlay colors,” he recalls. “I got really good at controlling the paint.”

In 2015, a pizzeria in NYC’s SoHo neighborhood invited Goldcrown to paint the exterior of their building. Valentine’s Day was coming up, so he composed a vibrant mural of overlapping hearts. (He calls them “bleeding hearts,” because of the streams of paint that trickle down from the pointy ends.) He added a small tag at the bottom, #LOVEWALL—a name that stuck.

To Goldcrown’s amazement, within days the photogenic mural went viral as a selfie backdrop for influencers, art lovers and practically everyone who passed by. He decided to keep on making hearts and see how far they would take him.  The end is nowhere in sight.

“That’s what people are asking for,” says Goldcrown, who now makes his home in West Hollywood, with his wife and 3-year-old son. “Hearts are a universal language, so hopefully I’m spreading some love.”

Goldcrown has painted #LOVEWALL murals in public and private spaces around the country and internationally, traveling to places such as Japan, Australia and the U.K.

One recent residential project was at the Mediterranean villa-style home of Make It Better Group Founder Susan Noyes in Malibu. Goldcrown’s assignment was to create a custom mural of bleeding hearts in a light well at the front of the home, a space accessible only from the basement level. The idea was to transform the space into a hidden garden room.

“I wanted to give it a lost, rustic feeling like the building had been left for years,” Goldcrown says.

He spray-painted overlapping hearts on all four walls, three of which were hung with frameless rectangular mirrors, vertically mounted, to amplify both the motif and square footage. His color palette consisted of subdued neutrals on a dappled, off-white background.

“She pretty much gave me complete creative freedom,” Goldcrown says. “Those are the best people to work with.”

Jesse Harrison, principal at Harrison Design, worked on the home and brought in Goldcrown. He told SPACES: “The idea was to take a dreary space and give it life,” Harrison says. “The piece was happy and joyous, and about love—but with a little edginess.” Messages of love were subtly scrawled on the walls, intended to be discovered by Noyes’s grandchildren.

In addition to his custom murals, Goldcrown’s canvases are wildly popular. His spray cans are ever-ready, but he also uses oils and acrylic paints. Some of his newer pieces marry neon and non-neon paint for a 3-D effect, or combine paint with actual neon light fixtures.  In addition to his bleeding hearts, his motifs include cacti, strands of yarn, drips, splatters and cursive handwriting.

“For me, some of the best moments are when I’m spontaneously inspired,” he says.

And for something completely different, up for sale is a white-framed palette covered in splotches of colorful paint, which he used in a commissioned abstract of Tokyo.

Goldcrown’s portfolio also includes a diverse array of partnerships and collaborations. His designs have appeared on skiwear for Moncler; footwear for Toms; wine bottles for Maison Marcel; denim jackets for Rag & Bone; baby wear and bassinet accessories for From Babies With Love; and limited-edition packaging for Elizabeth Arden, Estée Lauder and Sephora.

A two-year collaboration with Skechers lifestyle and performance wear for women, men and children launched in February. Under the label, Skechers x JGoldcrown, his heart designs are emblazoned on both footwear and apparel. New releases are coming out each quarter.

This fall, the artist will be painting #LOVEWALL murals at hotels in Dubai and Tel Aviv. Upcoming projects include a continuation of the collaboration with Skechers, and new partnerships in the beauty industry.

The best way for clients and potential clients to get in touch with Goldcrown is via his website. He’s active on Instagram, @jgoldcrown, with 55,000 followers, but don’t bother DM-ing him. He admits he is “rubbish” about responding.  Here’s another tip: Be prepared to wait. Goldcrown is booked up with commissions for the next six or seven months. Pamela Dittmer McKuen is an award-winning Chicago-based freelance features journalist who specializes in home, design and travel. She has dual passions for dark chocolate and cats. She’s an ardent supporter of Bridge Communities, a nonprofit that helps homeless families transition to self-sufficiency, and Feral Fixers, a trap-neuter-release and cat adoption agency. Scandinavian Chic: These 5 Cozy Chairs Are Practically Postcards From Copenhagen 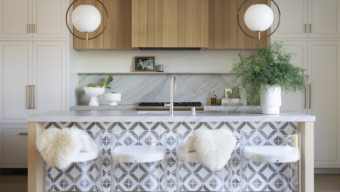 The Breezy, Natural Style of This Marin County Home Will Instantly Put You at Ease